Flawed mental models | Value Research https://www.valueresearchonline.com/stories/9960/flawed-mental-models/ One of the most flawed mental model of investing in markets is the belief that "There are people who know when a stocks price is about to rise. If one of them tells me, then I can make money"

One of the most flawed mental model of investing in markets is the belief that "There are people who know when a stock's price is about to rise. If one of them tells me, then I can make money" 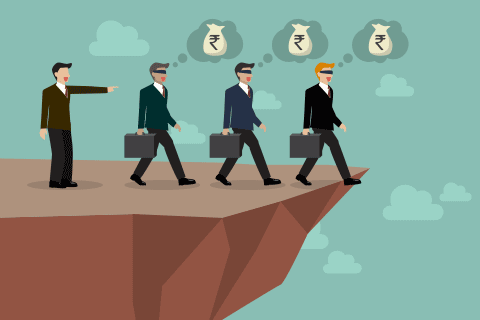 Here's a joke that has a great pedigree in the investment world. The father of value investing, Benjamin Graham, apparently used to narrate this story to his students and draw a parallel to the behaviour of stock market punters.

So this oil prospector dies and goes to heaven. At the gate, St Peter reads the account of his life and tells him that he's qualified for heaven, but there was a problem. “See that crowd over there? They're all oil prospectors who've arrived before you. And the way things work here, you can' get in until after them. So I' afraid this looks like a long wait for you.” “Not a problem", replies the man, “I know how to get rid of that crowd.” So he turns towards that crowd of oil prospectors and shouts out, "Hey, did you hear? Oil has been discovered in Hell.” And sure enough, as soon as they heard him, every single one of them ran off towards hell. Looking at this, St Peter reluctantly said, "Well, it seems your way is clear. You can enter heaven now." But the oil prospector had his doubts. “You know what? I think I'll follow the guys. The rumour could be true.”

As Graham used to point out, the oil prospector's behaviour has much in common with what passes for investment research nowadays. As sophisticated commentators would point out, their mental model of how the market works probably leads them to believe that if a lot of people believe in something, then it must be true. A mental model of something is our idea of how it works internally.

A flawed mental model can be a problem. For example, in the early days of email, a friend of a mine believed that if you reduced the font size in an email message, then the message would become smaller and therefore easier to send. It was a flawed mental model, or rather, it was the fax mental model being applied to email.

I believe one of the fundamental reasons why so many people have trouble investing in the stock markets is that they have severely flawed mental models of what determines a stock price. While there are many mental models of how the stock markets work, some are more common than others. Here's the commonest. “There are people who know when a stock's price is about to rise. If one of them tells me, then I can make money.”

This is the 'tip' model of the stock markets. It isn't so much a mental model as the lack of one. Unfortunately, this is a very common one. There seem to be a lot of people who believe that someone out there knows which way things will move and everything depends on somehow getting to know these secrets.

A little broader than the 'tip' model is the 'operator' model. Under the operator model, people believe that there are people (“operators”) who manipulate stocks and what one needs is to figure out what the operators are doing and then somehow, manage to ride the stock while the operator is pushing it. This model is actually realistic. Outside the big, high volume tickers, many, many stocks are routinely manipulated by the so-called 'operators', at least in the short-term.

However, this model is useful only for the operators themselves. To succeed, operators need greater and greater fools to buy into the stock they are operating on. Basically, if you are not an operator yourself, you are under considerable risk of giving away your money to an operator.

There is, of course, yet another model. This one is about observing how much companies earn and estimating how much they'll earn in the future and how they'll compete and other things like that. But compared to the other two models, few seem to believe in it so I suppose it can't be very important.

This story first appeared in May 2007.