Bangladesh's secret sauce of growth | Value Research https://www.valueresearchonline.com/stories/49511/bangladesh-s-secret-sauce-of-growth/ Bangladesh seems to be doing well based on headline numbers, but scratch the surface and one will find the reality to be not so rosy

Bangladesh seems to be doing well based on headline numbers, but scratch the surface and one will find the reality to be not so rosy

Bangladesh entered the 50th year of its formation in 2021 with a bang. As per estimates of World Bank, its per capita income, at $1,887, will exceed that of India ($1,877) - the first time since 1991. India suffered a de-growth in 2020 due to the pandemic and is expected to shrink by 10 per cent, while Bangladesh will grow almost 4 per cent. The change since 2015 has been dramatic. While India slowed, Bangladesh has continued its growth. When combined with a slower population growth, the per capital catch-up is apparent. Bangladesh also does well on some other development parameters. On the Global Hunger Index (GHI), Bangladesh is at the 75th place, while India, at 94, lags below even Pakistan, at 88. 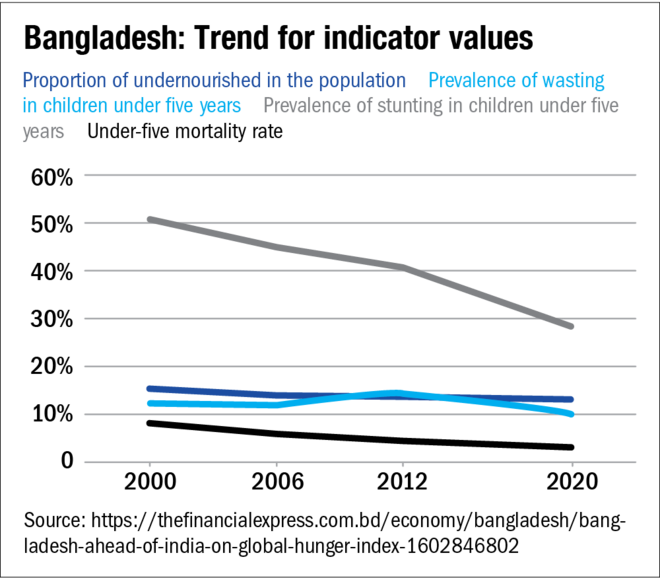 On women's participation in the workforce, Bangladesh scores at 36 per cent against India's 20.3 per cent. Bangladesh is now set, by 2026, to exit the group of least developed countries (LDCs) and join the ranks of developing nations - a group that India inhabits for far too long. What is the secret of Bangladesh's growth and how stable is it? Are things really better than India as the data suggests? And are there lessons for India? 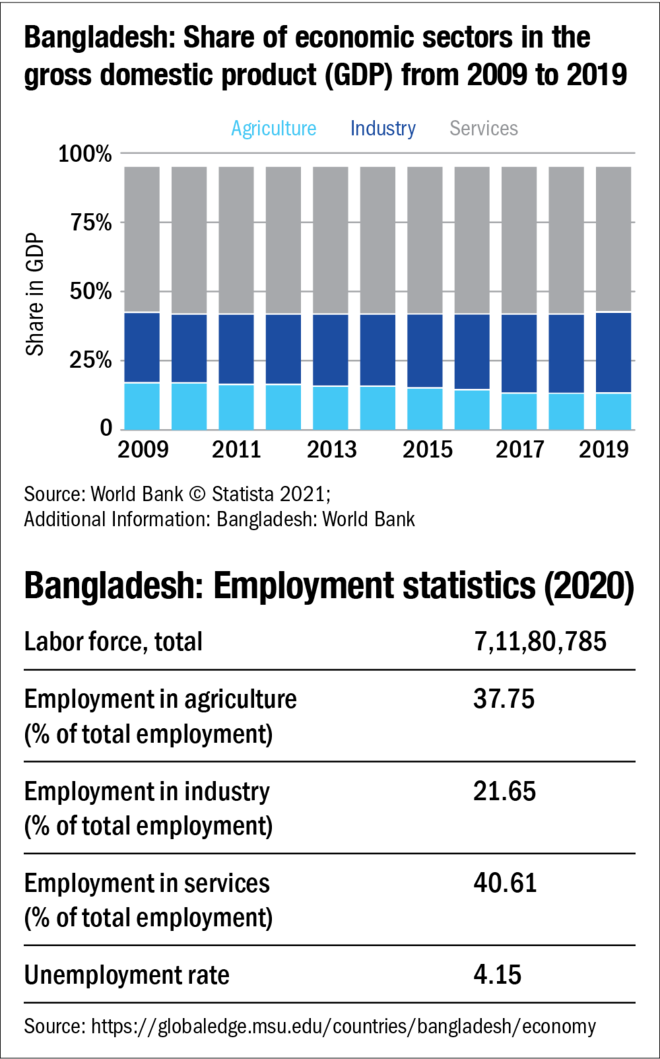 The growth engines
From the data in the chart 'Bangladesh: Share of economic sectors in the GDP from 2009 to 2019', it would appear that Bangladesh is a domestic economy, largely dependent on services. While agriculture seems to employ most people, its share in economy is falling and is being replaced by services and industry. Scratch the surface and it becomes apparent that the real driver of growth is the external sector, and even there, a single industry:

Agriculture, like in other countries in the region, represents a catch-all category, concealing under-employment. Its contribution to growth is low. Exports of textiles and apparel (readymade garments - RMG), on the other hand, is growing at almost 50 per cent higher than overall manufacturing growth - and now comprises 82 per cent of all exports. It employs about 4.4 million. Bangladesh is the second-largest apparel exporter in the world after China, while it's the third by a whisker if combined with textiles. The key to Bangladesh's success is its low labour cost.

Bangladesh adopted Bangladesh Labour Law of 2006 (BLL) - updating and modifying labour laws prevalent since colonial times. While forward looking and offering clarity to both employer and employees, it is often observed in the breach. A key freedom it offers employers is the ability to remove workers without cause. A survey conducted to check the functioning of these laws in the field reported a "preference of employers for short-term hiring of young workers". In fact, most workers were hired through contractors without the benefit of employment contracts as required by law. For example, over half the respondents in the garment industry noted that two copies of appointment letters were issued - one for the employer and another to show the global garment buyer; the worker received nothing. This allows management untrammelled freedom to hire and fire, not pay minimum wages or respect other labour laws, including that for overtime. While the situation has improved with time, RMG sourcing from Bangladesh is mostly driven by cost of labour. For all the lip service to better labour conditions, brands are seldom willing to increase piece rate beyond 2-3 per cent. Minimum wages, raised in 2019, are still at 8,000 BDT ($94.5) per month. The industry association for RMG exporters is dominated by politicians from all parties and is hugely influential. There is little in the form of legislative push for improving labour conditions or minimum wages.

Of the estimated 4.4 million workers the industry employs, almost 80 per cent are women. Men are largely employed in agriculture, construction or travel overseas to work in other countries (the remainder are unemployed). Employers prefer women because they work for less, are less demanding and can more easily be removed from a job if required. They also work hard - often spending 10 hours at work before going home to take care of house work. Obviously, with a dominant industry employing mostly women, Bangladesh ranks high on labour participation of women. Unfortunately, this represents an exploitative industry with few alternatives for labour and poor labour bargaining power - hardly the dreams of those espousing women participation as a measure of economic development.

The other major contributor to Bangladesh's economy is remittances from abroad. Bangladeshis form an important source of migrant labour internationally. Starting with GCC countries, they have expanded to countries like Japan, South Korea, Malaysia, Singapore and even Lebanon. Overseas employment seekers increased from about 2,50,000 per year in 2000 to 9,80,000 in 2008. Currently, it is estimated that approximately 7.5 million Bangladeshis live outside their country. Inward remittances were $18.4 billion in 2019, rising to $19.8 billion in 2020 despite the pandemic. Bangladesh was one of three large remittance recipients that registered a rise last year. Globally, inward remittances declined by an estimated $50 billion last year due to the pandemic. The increase in remittances is a mixed blessing. It is estimated that the increase represented repatriation of savings of nationals returning from overseas after losing their jobs. Partially, it also represents a decline in 'havala' transactions as informal channels couldn't function due to restriction on travel. This increases the risk of remittances falling in the future.

Bangladesh suffers from poor infrastructure, poor agriculture productivity, high levels of unemployment, a banking system with double-digit non-performing assets. The World Bank has, since 1972, committed over $29 billion in grants and interest-free credits. Seen in the context of a GDP of about $300 billion, this is not an insignificant amount. As Bangladesh loses its status of an LDC, its access to tariff-free exports to EU and USA could be threatened, along with grants and interest-free loans from multilateral agencies. Income disparity is high and rising. All this will increase challenges for future growth.

The government has planned to diversify its manufacturing base. Multiple SEZs are in the process of being developed and companies like Samsung have decided to move some of their manufacturing to Bangladesh. A bridge across the river Padma will increase access to regions of the country that earlier required longer travel. Logistics is improving through better connectivity. Foreign investment remains low at less than $3 billion. Market capitalisation of listed companies, while high in comparison to earnings and to historical valuations, still comprises only 14 per cent of GDP.

Bangladesh has done well to lift itself by its bootstraps and bring itself out of the 'basket case' it was once characterised as. To compare India to Bangladesh would be unfair, given the differences in size, resources and economic complexity. Bangladesh has a long way to go before it can truly be classified as an economic powerhouse.

Anand Tandon is an independent analyst

What is the cost of acquisition for property purchased before 2001?