Getting hulkier | Value Research https://www.valueresearchonline.com/stories/35094/getting-hulkier The biggest player in the FMCG space, Hindustan Unilever has raced in the last one year without any material improvement in its position

The biggest player in the FMCG space, Hindustan Unilever has raced in the last one year without any material improvement in its position

The country's largest FMCG company enjoys a number of strong tailwinds that make it irresistible to many, even at the current valuations. Here are a couple of them:

Monsoon-driven revival in rural demand: This is the second year of near-normal monsoons that have beneficial effects of increasing disposable rural incomes - a big positive for companies like Hindustan Unilever (HUL), which derive a majority of its income from everyday essential items. What's even better news is the higher autumn kharif harvest is expected to push discretionary expenditure up.

Muted raw-material price inflation to boost margins: While improving demand is one-half of the good news for FMCG companies, a muted raw-material price inflation means FMCG companies will be able to enjoy sustained margins. These can effectively be used to further promotions, new launches (as with the national launch of Ayush) and drive deeper into under-penetrated areas - a big plus for the company.

A favourable base: The demonetisation scheme and the launch of GST saw teething problems for a number of sectors. FMCG was no exception to this as distributors opted to clean out the pre-GST inventory. This is likely to produce higher-looking growth numbers for FMCG companies in the near term.

Subsiding Patanjali threat: The Patanjali threat appears to be wearing off, with the sales of established FMCG companies not taking as much of a hit from the disruptive new entrant as earlier feared. With many of the established players playing the Ayurveda gambit, Patanjali's strongest pitch has a number of contenders in the market today.

Why you should still avoid the stock
Most of the positives appear to be already priced in. There have been instances of raw material prices hardening and the management has indicated that further margin improvement is likely to be gradual. HUL has zoomed over 60 per cent in the last one year - double of the S&P BSE FMCG Index and now trades at a valuation of 60x. This is its highest valuation at any time in the last five years.

Much of the PE re-rating appears to be built on HUL's dominant position in the FMCG market in the country and the earnings visibility at a time when many other sectors are seeing volatile earnings. HUL has been trading at a premium to the market for some time now. Its average PE has been 42x in the last five years. The current re-rating is not backed by any material improvement in the position that the company was enjoying earlier. Sans that, current valuations appear overheated. 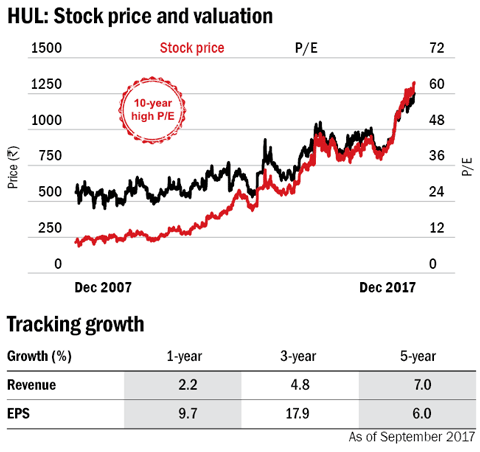