The third-quarter results of Tata Motors jolted its investors, who were hypnotically looking at the growing JLR numbers. The company reported a fall of 96 per cent YoY in its consolidated profit, which dropped from Rs 4,334 crore to Rs 112 crore. But wait! This minuscule profit would actually look good if one took into account the fact that the company could have reported a big loss if it had not capitalised its product-development expenses.

Capitalisation of expenses is an accounting practice that allows recognition of expenses by recording them as a long-term asset. These expenses are amortised over a period of time. The deferment of recognising expenses artificially boosts profits.

The company's annual report for FY16 states, "The expenditure transferred to capital and other accounts has increased by 8.5% to Rs 16,718.43 crores in Fiscal 2016 from Rs 15,404.18 crores in Fiscal 2015, mainly due to various product development projects undertaken by the Company for the introduction of new products and the development of engine and products variants."

For almost a decade, Tata Motors has capitalised its product-development costs. Since FY09, the company has capitalised Rs 92,000 crore as against the operating profit of Rs 2 lakh crore during this period. Had the company not capitalised these expenses, it would have reported much lower profits in many of these years.

Over the years, this policy of capitalising product-development expenses has resulted in the creation of intangible assets of almost Rs 58,000 crore. These intangibles will have to be written off at some point of time in the future, which could lead to heavy losses in the future. What needs to be seen now is if the revenues generated by the company's new models are large enough to absorb the write-offs. 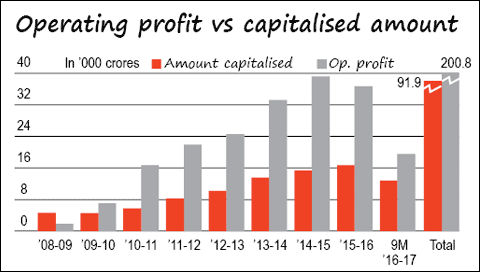 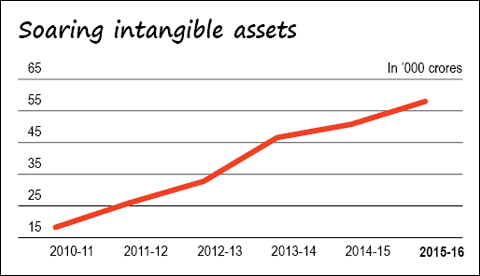 Investors should fasten their seat belts.

This column appeared in the March 2017 Issue of Wealth Insight.