Time to really pull up India's out of control banks | Value Research https://www.valueresearchonline.com/stories/33213/time-to-really-pull-up-india-s-out-of-control-banks/ Banks are dipping into customer's pockets whenever they feel like it and the RBI just doesn't care

Time to really pull up India's out of control banks 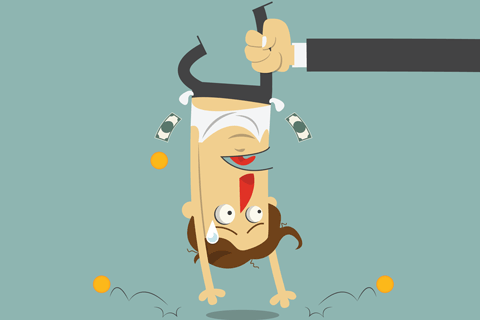 Banks' cash transaction fees are suddenly in the news. The immediate trigger for this appears to be an announcement by HDFC Bank that it would henceforth charge Rs 150 plus taxes for each cash withdrawal or deposit after four deposits each month. Here, it seems that HDFC Bank missed a trick because the normal stratagem that banks employ is to introduce charges by stealth. ICICI Bank and Axis Bank have been quietly charging similar fees for some time now. Under the garb of supporting the government's efforts to promote cashless, these (and possibly other) banks have decided to relieve their customers of some cash.

Obviously, it goes without saying that there's no uniformity or transparency in these charges. HDFC bank will charge Rs 150 per transaction, someone else is charging Rs 50 while a third bank is charging Rs 5 per Rs 1000. How are these charges arrived upon? Does it make sense for them to be pro-rata? Does the Reserve Bank have any idea about these charges? Does it have any idea about how the actual amount was arrived upon? We don't know but it's not difficult to guess the answer.

Other banks have imposed even more puzzling charges. For example, Axis Bank has an extra charge for transactions at a 'non-home' branch. This is the first retreat from branchless banking that I've come across. In these days of fully networked systems, could it actually cost Axis Bank extra to conduct a customer's transaction at one branch rather than another? I suspect not. It's very likely that these banks are just hunting for likely sounding reasons to charge extra. More to the point, is the RBI asking such questions?

Of course, the tricks go way beyond just transaction charges. Just a couple of weeks ago, a customer protested on social media that HDFC Bank had enrolled him into a 'Preferred Banking Programme' (which has a fee) by sending him an email which had an 'opt-out' link tucked away at the bottom. That is, the customer was assumed to be enrolled unless he clicked on the link to opt out. Now this is truly an unethical practice. However, when the customer protested, the bank stood its ground and said that the practice was entirely in keeping with regulations.

I'm sure that's correct. It goes without saying that these are heavily lawyered-up organisations who must be sticking to the letter of all laws and regulations in everything they do. The fault lies with the regulator, the Reserve Bank of India. It's unfortunate that there's so much discussion of the RBI in terms of leadership, autonomy, monetary policy and such issues. This detracts from the fact that regardless of how it performs in other areas, India's central bank has been an utter failure at consumer protection. It's behaviour suggests that it suffers from severe regulatory capture, being concerned mostly with keeping up appearances while allowing banks a free run.

Here's something that I've said earlier--on the issue of banks' excess charges, there will never be any improvement as long as banks are allowed to dip into customer's funds unilaterally. Think about it, when any other business needs you to pay for anything, don't they have to ask for the money and wait till you actually hand it over? If you go to a shop, if the shopkeeper feels that you are spending too much time there and he's incurring extra cost, can he reach into your pocket and pull out some cash? Obviously not, that would be a crime. But banks can do this.

Banks get to just take your money whenever they want to charge you for anything. Why is this the case? I can't think of any good reason, except that they can because you have entrusted them with the safekeeping of your money. Here's a suggestion--there should be a fundamental change to banking laws so that whenever a bank has to charge you for a service, they should send you bill and you can make a payment against that bill. They should not be allowed to just take your money, just like other businesses who are not allowed to do so.

This sounds like a big change but the unfortunate fact is that India's banks have acted in such bad faith that it's time for such measures. What do you think?