Higher input prices weigh on Castrol stock | Value Research https://www.valueresearchonline.com/stories/33189/higher-input-prices-weigh-on-castrol-stock/ From its 52-week closing low of Rs358.05 in late December, Castrol India's stock has gone up about 17% so far, but the road for further appreciation is rather slippery

From its 52-week closing low of Rs358.05 in late December, Castrol India's stock has gone up about 17% so far, but the road for further appreciation is rather slippery

Castrol India Ltd delivered a decent set of December quarter results last week. Total operating revenue declined 1% compared to the year-ago quarter to Rs782 crore. The lubricant maker had to face the unfavourable side-effects of demonetisation last quarter with an overall volume growth of 2% year-on-year (y-o-y), which wasn't particularly impressive. That's lower than the volume growth of over 4% for the calendar year 2016.

Further, realisations fell y-o-y last quarter. Analysts from Dolat Capital Market Pvt. Ltd wrote in a note to clients that realizations grew by 0.1% on a sequential basis and declined by 3% on a y-o-y basis. "This was primarily due to the discounts that Castrol India had to offer considering the competitive landscape," added Dolat Capital. 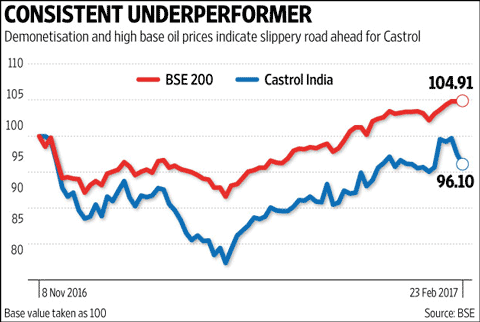 As a result, operating profit margin increased 126 basis points to 28% in the December quarter. The measure was flat compared to the September quarter. One basis point is one-hundredth of a percentage point.

What of the stock? From its 52-week closing low of Rs358.05 in late December, Castrol India's stock has gone up about 17% so far. But the road for further appreciation from these levels is rather slippery. Given the management's focus on driving volume growth in the current competitive pricing scenario and the expectation that the base oil price will remain elevated, Edelweiss Securities Ltd expects earnings per share's compounded annual growth rate to be a mere 6% over calendar year 2016-18E. Base oil is a key raw material for lubricants.

The adverse impact of demonetisation, which hit lubricants consumption as well as sale of vehicles, is expected to continue in the early part of 2017, says the company. Additionally, firm base oil prices may result in higher input costs. Collectively, these factors are expected to weigh on the Castrol India stock, particularly as valuations at nearly 30 times estimated earnings for 2017 are not exactly cheap.