PPF: The incomplete solution | Value Research https://www.valueresearchonline.com/stories/31694/ppf-the-incomplete-solution/ If it is a safe investment you are looking for, then the 8.1 per cent tax-free interest on the PPF is hard to beat. But it suffers from 3 key disadvantages

If it is a safe investment you are looking for, then the 8.1 per cent tax-free interest on the PPF is hard to beat. But it suffers from 3 key disadvantages 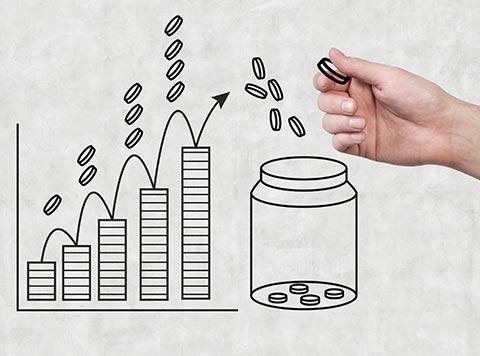 Available through the India Post network as well as leading banks, the Public Provident Fund is the preferred retirement vehicle for the non-salaried and the self-employed.

The scheme
Just like the NPS, the PPF also offers a flexible structure where you can make either monthly or lump-sum investments every year. The investments can range anywhere between ₹500 and ₹1.5 lakh a year, which is the maximum ceiling on investments. The PPF's maturity period is 15 years, but this is extendable in blocks of five years as the scheme matures. Early withdrawals from the account are allowed every year from the seventh year onwards. This makes the scheme more liquid than both the EPF and the NPS. The money collected in the PPF is used to fund the borrowing programmes of both the central government and the states. Interest rates on the scheme have been made market-linked from 2012, and are now subject to a formula based on the prevailing G-sec yields.

Returns
The PPF is in the process of making a transition from a 'fixed-return' small savings scheme to one whose rates will 'float' up and down with market interest rates. The interest that you will earn on your PPF account for each financial period is announced by the central government in advance. This rate applies not only to your contributions for the year but also to all the outstanding balances that you may have parked under the PPF account. In 2015-16, the PPF offered an interest rate of 8.7 per cent to its subscribers. From April 1, 2016, these rates have been slashed to 8.1 per cent. 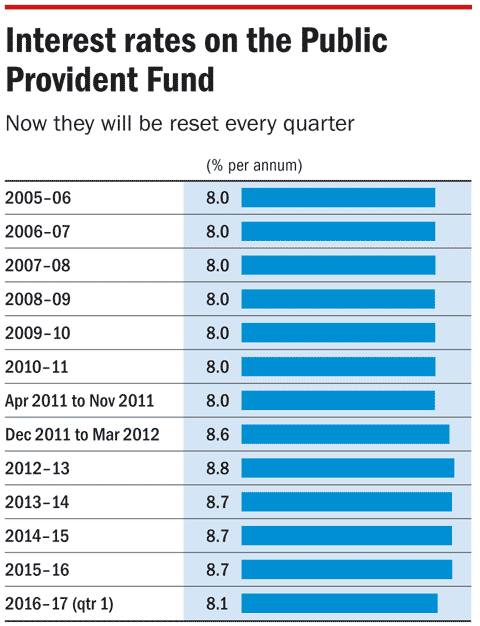 Taxation
The PPF is still in the EEE regime. Your contributions to it are exempt from tax under Section 80C (provided you have room under this section) to the full extent of ₹1.5 lakh. The interest earned is exempt from tax and so are final withdrawals.

What's changed
With the government keen that interest rates on small-savings schemes should be 'market-linked' and not out of sync with bank deposit rates, it has announced significant changes to the interest calculations in March 2016. The interest rate on the PPF will now be reset every quarter and fixed at a 0.25 per cent spread over benchmark G-sec yields. G-sec yields for this purpose will be the average yields announced by FIMMDA for the preceding three months. While this will ensure that you will get higher rates if interest rates in the economy move up, you should certainly brace for greater volatility in the PPF rates from here on.

Apart from the changes in rate-setting, premature closure of the PPF account has been allowed too (before the maturity of 15 years). Subscribers have been allowed to close the account to meet specified emergencies (such as critical illness or higher education of children) with a 1 per cent penalty on the interest payout. However, such a premature closure is only allowed for investors who have completed five years. 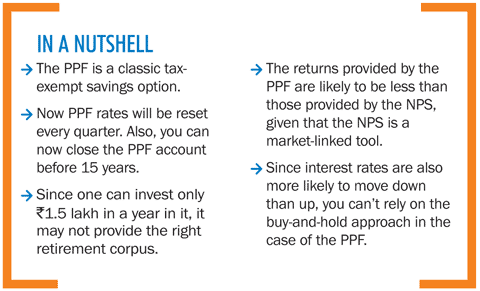 Our take
If it is a safe investment you are looking for, then the 8.1 per cent tax-free interest on the PPF is hard to beat, even after the recent pruning. The early closure rule has also made the PPF far more liquid than either the EPF or the NPS. PPF remains a good bet on the taxation front, with the EEE regime intact. Unlike the NPS, your final withdrawals from it are not subject to any conditions such as purchase of annuities.

However, the PPF suffers from three key disadvantages in its current form. One, even if interest rates in the economy were to go up (and that is unlikely over the really long term), its returns are likely to be lower than instruments such as the NPS. The PPF invests in the safest instrument of all - government securities - and the safest instruments are also bound to offer the lowest rates at any given point in time. Therefore, even if you are a risk-averse investor who wants to avoid equities, the corporate bond and G-sec options of the NPS may offer a far better risk-adjusted return than the PPF.

Two, the quarterly 'floating-rate' structure brought in now will make it impossible for you to plan towards a specific retirement corpus using the PPF. Despite it being a long-term retirement vehicle, floating rates will not allow you to reap the benefits of buy-and-hold investing.

Three, the annual investment cap of ₹1.5 lakh on the PPF means that you cannot step up your retirement savings as your income rises. If you depend on the PPF alone, it may leave you with an inadequate corpus at retirement.