M&M losing steam? | Value Research https://www.valueresearchonline.com/stories/30476/mandm-losing-steam/ Just when investors regained faith in the company, a host of developments have cast a pall of gloom on the stock

Just when investors regained faith in the company, a host of developments have cast a pall of gloom on the stock 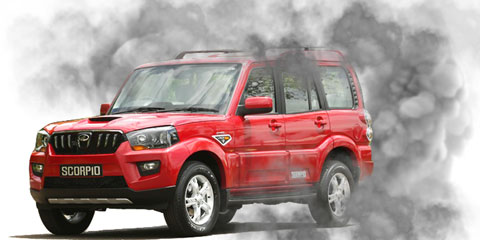 The Mahindra and Mahindra Ltd (M&M) stock is one of those which haven't participated in the recent breathtaking rally. Just when investors regained faith in the company's growth prospects, a host of developments have cast a pall of gloom on the stock. Leading brokerage firms like Credit Suisse, CLSA and Nomura have downgraded the stock.

First, the excise duty exemption on its Haridwar plant expired in January, which will increase price of vehicles made there. One wonders if the company will be able to pass on the entire increase in excise duty to the buyer. Analysts are sceptical and given that about 15% of the firm's total vehicles are made at this unit, the excise levy may pull down operating margin in the March quarter by 100 basis points. A basis point is 0.01%.

This is not good news coming at a time when investors were leaving behind the past quarters' underperformance in sales. In fact, they were just celebrating the higher year-on-year margin clocked in the December quarter. The stock outperformed the S&P BSE Sensex and Auto index in the last few months on improving auto sales. Most of this, of course, came on the back of new utility vehicles launched in the last nine months and the higher income earned per vehicle sold in the auto segment.

Another reason for concern on the Street is the Union budget's move to slap a 4% infra cess on diesel vehicles that are longer than four metres, which can impact demand. There is a cess on smaller passenger vehicles too, but then it may be comfortably passed on to the consumer, as the cess is lower.

Moreover, after a slew of new launches in the last nine months, the company barely has any more in the pipeline for the near term.

Obviously then, the onus is on the farm equipment segment. M&M commands a 42% share in the tractor market and sales in February, although compared with a low year-ago base, have been robust.

A Nomura Research report says that higher infrastructure activity could boost demand from the haulage segment. Demand growth, however, hinges on a good monsoon.

According to Nitesh Sharma, an analyst at PhillipCapital (India) Pvt. Ltd, "Long-term pressures on sales are evident given the cut-throat competition in farm segment and no new launches in the utility vehicle segment."

The silver lining in the dark cloud is that lower interest rates and fuel prices may stack up against the negatives to support demand across both auto and farm equipment.

M&M could be a winner if higher sales can combine with the benefits of operating leverage to improve margins in the medium term. Until then, the stock may be range-bound.