The star in the IT pack | Value Research https://www.valueresearchonline.com/stories/29531/the-star-in-the-it-pack/ HCL Tech has seen fast growth, which catapulted it in the league of big Indian IT companies. Buy it for the long term

The star in the IT pack

HCL Tech has seen fast growth, which catapulted it in the league of big Indian IT companies. Buy it for the long term HCL Technologies - long an upstart to India's Big Three, TCS, Infosys and Wipro - has broken into the big league with a performance that beat its bigger brothers. Here's an interesting fact: HCL Tech beat out the top three in stock returns on a ten-year basis, with gains of 632 per cent (excluding dividends) as compared to TCS' 616 per cent, Wipro's 151 per cent and Infosys' 30 per cent. 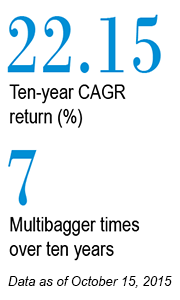 The infrastructure management services (IMS) vertical has been the biggest driver of HCL Tech's revenues and its re-rating. The company has beaten its peers in aggressively bidding in the infrastructure space, which has deals with estimated worth of $124 billion coming up for renewal between FY15 and FY18. The share of infrastructure has jumped from 21 per cent of revenue in FY10 to 34.6 per cent in FY15. Infrastructure brought around two-thirds of the incremental revenue growth for the company through FY12-14. In FY15, it accounted for 41 per cent of incremental growth, raising fears of a slowdown.

Falling EBIT margins are another concern. From a peak of 24.6 per cent (March 2014), margins have contracted to 20.2 per cent on higher onsite expenditure and investment in new delivery centres. The management has guided margins of 21-22 per cent in the medium term. 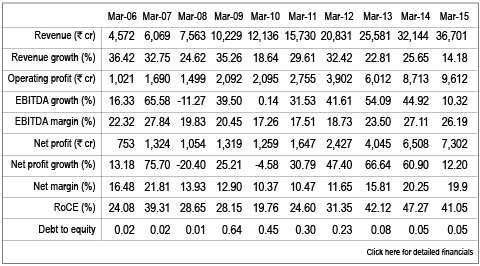 The stock is down 16 per cent from the time the company warned investors that revenue and earnings growth could slow down, taking valuations down to 16 times earnings, below the average of 17 times. Earnings are expected to remain subdued this year before recovering in the following year. According to JM Financial, earnings per share could grow by 6.5 per cent in FY16 before growing by 14 per cent and 15.7 per cent, respectively, in the following two years. This opens a window of opportunity to buy HCL at lower valuations. Buy with a long-term horizon.