Major Shareholders of Indian Stock Market | Value Research https://www.valueresearchonline.com/stories/28417/major-shareholders-of-indian-stock-market/ An analysis of the shareholding pattern of Indian listed companies reveals that FIIs are in a very strong position to influence the Indian market

As per the latest available shareholding pattern (as of March 31, 2015), the combined market value of the stakeholders (also called market capitalisation) of all the listed companies on the BSE crossed ₹100 trillion. We checked the shareholding pattern to find out who owns how much of the total value of the companies listed on the BSE. In the following report, we have also shown how the BSE 500 companies have witnessed change in ownership in the last ten years.

Domestic institutional investors (DIIs), which mainly comprise insurance companies, banks and mutual funds, own about 20 per cent of the free float. The category labelled as 'Others' includes depositories receipts like ADRs and GDRs, and shares held by custodians. 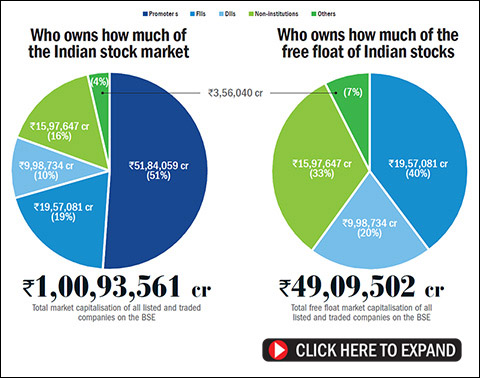 To give a historic and comparative view of how the ownership pattern has changed in the last ten years, we have also given the consolidated shareholding pattern of the BSE 500 index companies. We considered only the companies which have a history of ten years so that the changes are not affected by new entrants. The combined value of these companies accounts for 80 per cent of the total market capitalisation of all the listed companies on the BSE. The graphs shows how the free float (market value of non-promoter holdings) has gone up during the period. On a relative basis, the promoters' shareholdings have gone down partly due to compliance with the minimum public-holding norm of the Sebi.

The accompanying pie charts show FIIs' holdings have risen in the last ten years and are at a record- high level. On the contrary, retail shareholding has gone down and retail investors shy away from the stock market. DIIs, who also derive their investments from retail investors, have varied holdings over the same period. 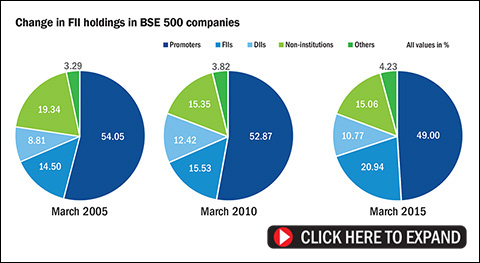 Following are the major shareholders of the Indian stock market. Among the top ten public shareholders, six are FIIs. LIC of India accounts for almost 4 per cent of the total market value of the listed equity. The president of India represents the Government of India holdings in public-sector companies. The following table is an indicative list and actual figures may differ due to indirect equity positions.